Science of Meditation on Twin Hearts

Science of Meditation on Twin Hearts

Scientists, doctors and researchers agree that meditation is good for our health and minds. Testimonials and anecdotal evidence suggests that meditation on Twin hearts has transformed the lives of hundreds of thousands of people from all traditions and cultures around the world.

The Meditation on Twin Hearts is an advanced meditation technique introduced and guided by GrandMaster Choa Kok Sui, the founder of Modern Pranic Healing and Arhatic Yoga.  This meditation has been translated into over 20 languages, and is practiced by hundreds of thousands worldwide by people of different religions (including Hindus, Christians, Buddhists, Muslims, Sikhs, and Jains) as well as other cultures and philosophies.  This meditation is a simple yet powerful technique as it incorporates four of the most common type of meditation: awareness, spiritual, focused, and mantra meditation.

Using quantitative brain waves or EEG studies, Jeff Tarrant, PhD and Neus Raines, PhD saw differences between the brain waves of experienced and non-meditators of Meditation on Twin Hearts.  Results revealed experienced meditators had significantly more gamma waves (30-90 Hz) at pre- and post-tests.  These brainwave patterns were found particularly at the anterior and posterior cingulate cortex suggesting increased integration and activation of key brain regions with the ability to modulate attention and states of alertness. Increased gamma waves are observed in high levels of cognitive functioning particularly in successful professional athletes, entertainers and high performing professional musicians when they are “in the zone.”  Psychological functioning assessments using the Brunel Mood Scale (BRUMS) and the State-Trait Anxiety Inventory (STAI), as well as questionnaires using the coping self- effacing scale and the Five Facet Mindfulness Questionnaire (FFMQ), also suggested that practice of Meditation on Twin Hearts effectively reduces anxiety and improves cognitive function and happiness – even if one practices for the first time.

In each session, participants learned about the study and Meditation on twin hearts; they completed a self-assessment questionnaire to score their current levels of happiness and attention; then everyone practiced the guided meditation together. Afterward, participants reviewed and discussed any changes to their self-assessment scores in small groups. Participants were encouraged to write down specific actions they would take in response to the training.

AURA AROUND  THE LITTLE FINGER

The GDV images show the bioplasmic energy field around the finger of S.M.P.before meditation, and after doing the Meditation on Twin Hearts.

AURA AROUND ALL TEN  FINGERTIPS

AURA AROUND THE ENTIRE  BODY 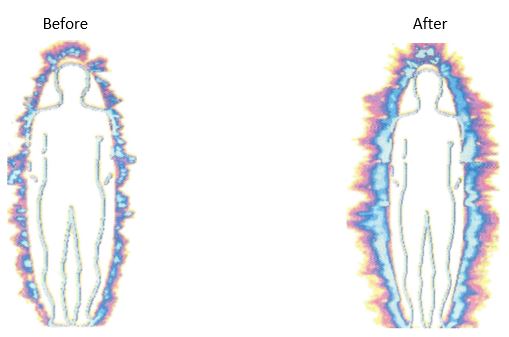 The above images show the bioplasmic energy field around the whole body (as computer generated by the GDV camera) of S.M.P.before and after doing the Meditation on Twin Hearts.

(The GDV images were taken by the All India Yoga Vidya Pranic Healing Foundation Trust. Research by Or. C. Sundaram and Or. Vrunda J.P.)

How Do We Meditate?

What is Meditation on Twin Hearts?

Leave a reply Click here to cancel the reply

This site uses Akismet to reduce spam. Learn how your comment data is processed.